In this time of shrinking economy, jobs being down-sized, and home foreclosures there is an abundance of advice. This is a website that I came across in my browsing and I think it's just the ticket for starting yourself on the path of financial education. You know, the one we didn't get or didn't listen to in school.

Larry Winget on the Today Show 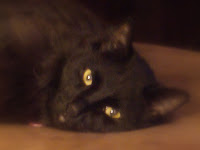 I always thought that it would strike the humans in our household first. Carroll and I have recently down-sized to a smaller apartment, not anywhere near the size that we were used to living in. But, after six weeks of moving things around, finding innovative ways to store things, and just plain old ditching stuff I think that we've made it a home. The cat, Jade, on the other hand has other ideas. 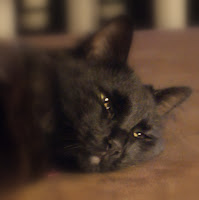 Jade and I have always had a relationship at a distance. I call him names and he stays at a distance. I don't yell at him, unless he's caterwauling at four in the morning. Maybe a pillow heaved in his general direction, but there is no anger or animosity towards him. I've tried to pet him and sometimes he'll attempt to let me.

Picture this: He's within three feet of me and I call him. He feigns indifference while wandering in my direction and then, still inches from my fingertips, he drops to the floor and rolls over expecting me to cover the remaining distance. Fat Chance!

As the weather get warmer (yes, I live in Texas and it will be seventy-five degrees in the middle of February,) we like to leave the doors and windows open. Of the two doors, only one has a screen on it. In the past, we've never had a problem with him wanting to leave the house, but the first night we had a little scare because he disappeared. We found him okay, but it took us about five minutes. Just the other day, Carroll had to chase him again, even after she yelled at him to stop. Did not listen and even ran from her. Totally out of his character. Today, he tried to sneak past me. I sit at a desk right by the back door, so he has to get pretty close to me. I caught him out of the corner of my eye, slinking along. I turned and moved toward him and instead of running away, he kept moving forward. He doesn't seem to fear me. That's a bummer.

I can only speculate as to why the change. The apartment is too small, he's old and senile (11 years old or so), the abundance of smells on the sidewalk that runs by our patio, or the ample amounts of wildlife out our backdoor. Who knows? 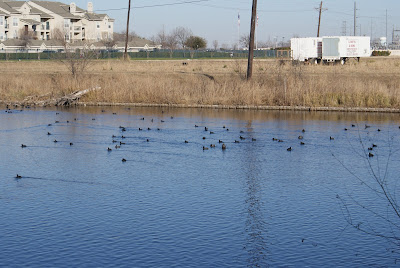 Ooops, there he goes again!

So, to begin, let me say that I'm a fan of many styles of music.  I've seen in the news where Steve Martin has released a new album called "The Crow: New Songs for the Five-String Banjo."  He's played on albums before but if I'm not mistaken this is his first solo.  Available on Amazon right now, but will be available everywhere else on April 26th.  Below is a link to a great article on him.  If you clink on the name of the song above, you can go to the Amazon website and listen to snippets of the album.  He's a very talented man, whom I admire.

I've been meaning to do this for a long time, but I always seem to find something else to do. I love the idea of being connected and I have ideas I love to share, it's just the writing that I don't like. I wasn't like that when I was a kid.

So, any way. For all of you not in the know, Carroll and I have made some big changes in our lives, for the better. Now don't get excited, we didn't go vegan or anything like that. It's just that she and I weren't very happy with our career choices. I'd been a DJ for 13 years and one day I decided I was tired of being the guy who was responsible for getting the party started or not. Then, there was the whole dealing with folks who didn't know when to say when. I'm a guy that can get a temper. Some people know that, others don't. Those who don't probably never saw me at work the last few years. It started to wear on me and I couldn't control my temper because I couldn't control stupid people. There, I said it. There are stupid people out there. You know who you are. And you don't need no sign.

I went into appliance repair. Yep, some of you said "whoa, didn't see that coming!" Me too. But, I had a background in electronics and some mechanical and it was a job. The last two years I spent on the counter at an appliance parts place. Love the people on both sides of it. But, there was something missing. I had tossed around the idea of getting back into djing, but I knew I didn't want to go back to the clubs. I had done some research on the net and found a couple of schools for broadcasting. One even taught both radio and tv.

Over dinner one night, Carroll finally came out and gave me a nudge. She said that if I wanted, I could go to school full time and take a part-time somewhere and we'd make it work. I fiddled with the thought, but I tend to over-analyze when it comes to a decision that involves both of us. We had been trying to have a baby, we were wanting to buy a house, and I just didn't know how she felt about it. I know, I know, Carroll had told me many times that she would support me no matter what I decided, but at what point does she decide to have me committed to a mental ward.

So, since she is the one that brought it up, I looked into it more seriously and decided to do it. As of December 31st, I became unemployed from my full-time job at Appliance Parts Depot. In that time, we have down-sized from a 3 bedroom apartment to a one. I never thought we would get it all in here, but we have a garage that we can put a lot of stuff and with that comes my permanent parking spot. We have very little guest parking so on some nights I had to park outside the gate. Sucks! Rent went down $300 or so and the electricity is almost $100 cheaper plus not as much water and sewer. I also don't spend as much on gas since I don't drive to work, and there is no lunch costs. Really scary thing is that with just Carroll's income, we still put money in the bank and cover all of our bills. We joke that she is my sugar mama.

We wouldn't be able to do this if we hadn't paid off all of our credit card debt. Well, I take that back. When we moved in, we had to get rid of our couch and love seat because it was not gonna fit in here. So, we bought a few pieces on one of those "no interest and no payments for 18 months" plans. Don't go screwin' up your eyes, we do know the risks. Again, we have no debt except for a car payment and an old school loan. We can make payments right now and will have it payed off almost a year before the first payment is due. So, don't worry. We're on it!

Now about the school; I start March 29th and will be in school for about 8 to 10 months. One of the big selling points of the school, in addition to the actual radio and tv personalities that teach here and the state-of-art facilities is the fact that for the rest of my life, I will be able to walk in to any of their facilities and book studio time to work on any project that I need to with no questions asked. The director spoke of two guys that run a videographer business without any of their own gear or studios because they use the facilities there. And, if I ever need a job lead, they will give them to me wherever I happen to be at the time. That's more than some full-blown colleges will do for you.

In the meantime, I cook, clean, run errands, and other assorted task. I'm hoping to get the garage re-arranged so I can get my ebay stuff rolling. And, I'll try my hand at this blogging thing. The only stipulation Carroll put on all this is that when I land my first job, she get's to quit her job and let me take care of her for a while. And I'll be more than happy to do that.