A Voice From My Childhood

I was surfing the internet killing time when I came across an article on the most watched Super Bowl ads of all time. One of them was the Ram Truck ad called “Farmer.” It was narrated by the late Paul Harvey and it talks about God creating a caretaker for the Earth. It’s a very poignant portrayal of the American farmer and it almost makes you want to go out and start busting some sod.

But, then again, Paul Harvey’s voice does that to you. I was first introduced to his voice when I was little boy. My grandfather, Thurston Adcock, would listen to him every day at the same time and if you happen to be visiting during that time, well, you just had to listen to. For the duration of the show, time stopped, no sound other than the resonance of his tone and the stories that sucked you in and made you feel warm all over. It’s no wonder that when I think of my grandpa who passed away in 1987, I also think of Paul Harvey. Take a listen to the ad, and then do yourself a favor and track down some of his shows and treat yourself.

"So God Made A Farmer"

Here is a link that will take you to archives for THE REST OF THE STORY. You can also go to his website, run by his son, Paul Harvey, Jr.

You know, I’m gonna cut to the chase. 2013 sucked. That’s as blue as I’ll get with it, because one day my Grandma or daughter might read this and I respect them enough to leave it at that. But, 2013 did suck, so 2014 shouldn’t have too many problems outperforming it.

We knew it was going to be that way when Carroll’s oncologist gave us the news that there was nothing left to do in December of 2013. Worst case scenario gave Carroll only three months to live, so we knew that it would be soon, but we always thought that she would degrade slowly. Carroll went from looking as if she were in perfect health to gone in less than twenty-four hours. We expected a slow decline with family having time to come see her and pay final respects, but instead, she passed in agony from excruciating headaches. In a way, that was better than the long, slow process. Though her death certificate says February 4th, she passed at around 11:20 pm on February 3rd. It was within a thirty minute time frame of when her dad passed a year and a half before on the same night of the week and in the same spot on the bedroom floor that he passed. My mother says that it is why Lilly kept seeing Grandpa Jim’s spectre around the house. He was waiting to take his daughter home. Over the last year, I’ve heard things. Whether they are Carroll or not, I don’t know, but we talk to her nonetheless. We say our prayers, we yell “I love you, Mama” to the ceiling, and we tell each other how much we miss her.

I moped for a good few months, entertaining myself by going to conventions and staying active on my blogs. Some days, I would just sit in front of the computer and stare and then there were days that I would sleep. Some days were amazing. Lots of energy, lots of ideas, then the next day would leave me lethargic and not wanting to do anything.

As the holidays approached, I spent more time with family and less time on the computer. I’d still hop on Facebook and say something, but most of the time just lurk. Both Lilly and I took the holidays rather well. No breakdowns, no collapses. Yet, we still haven’t reached the one year mark. 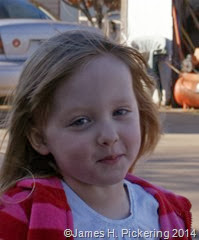 Lilly has been doing well in her day school and she loves it. She has friends that she loves and talks about on a regular basis. I’m hoping to put together a play date when the weather warms up. She’s precocious, quick witted, a tom boy and a princess at the same time. I know her mother smiles down on her with a smile from one side of the universe to the next.

I am gearing up to make 2014 a knockout. I won’t give details, but I am starting my own business. Carroll always told me to do what I love. She was my biggest supporter and I miss her so much for that. So, within the next few months, I’ll have huge news on that front.

Last, but not least, we raised over $6000 for the National Brain Tumor Society in November. I plan on becoming a big part of the event to honor Carroll’s name and giving spirit, so be prepared to get sick of me.

If you have not heard from us personally in the last year, please do not take it to heart. We have been fighting daily with our emotions and sometimes forget the little things. Know that we do love you and you are still a part of mine and Lilly’s lives.