I've posted here before about Joey Feek's passing in 2016 and how I watched how her husband Rory dealt with it and the raising of a little girl by himself. So many comparisons in mine and his life.

Recently he had to deal with the loss of her Dad and penned this blog post talking about dealing with the death of a loved one and he touches on the effect that it might have on his daughter. The link to the post is here (https://www.roryfeek.com/post/happy-sad) and my comment to him is below.

So sorry to hear this. My situation is similar to yours. In fact, it was after the loss of my wife in 2013 and my little brother in 2014 that I heard about Joey and and started following your stories. I cried along with you, as so many others did, when Joey passed. My daughter was only 3 when we lost Carroll. We lost her Dad the previous year, and then along the way, every year seemed to take so many more in our family. Just in the first month of this year I lost both of my grandmothers and last year two uncles within a month. My daughter has learned to deal with death at such an early age and that will make her a stronger person down the road, as will it make Indie, but you wish that your children didn't have to learn that. Watching you deal with life has given me strength in my daily trials and I thank you for that. Much love and blessings on your household as you deal with this.

Though it is said that the Lord will not give you more trials than you can handle, I've often wished that he didn't have so much faith in me. And much love to all of those that are dealing with their own trials. 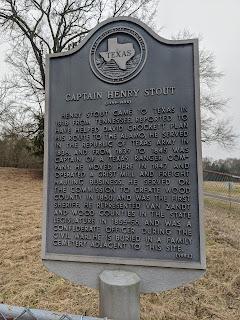 Stout, Texas. Google pulls it up on a map, but it's only an intersection in the middle of East Texas. A few houses, pastures and plenty of woods. But at one time it was a small community named after a pretty interesting fellow.
It was brought to my attention one night while out singing karaoke. A friend had mentioned reading some of my other stuff and loved the idea of rambling around East Texas, but she loved hearing long lost stories about the people that populated this area two centuries or so back. And one of those stories was about Stout and the rumor of Mexican gold.
There isn't a lot of info about the gold heist. All that I can find is that a group of Americans stole a mule train load of payroll from the Mexican Army. As they made their way through the area, the Mexicans were hot on their trail and so they buried it as quickly as they could somewhere south of Stout. Though some folks have made to look for it, no one has found it and it remains hidden. I did a little figuring and using some really fuzzy math figured that those mules were probably carrying just under a million dollars worth back then, but it would be almost seventy-five million today. That's enough to make me wanna break out some shovels and a metal detector. Again, not enough info to make a real go of it, but it did introduce me to a very colorful local gentleman by the name of Captain Henry B. Stout. 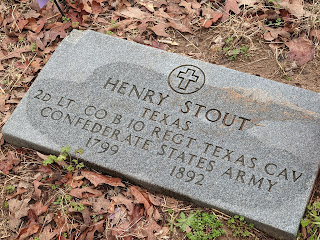 Captain Henry B. Stout was from Tennessee and came with his wife and a newborn to settle in Texas back in the early 1800's. After reading some of the news articles from over the years about him, they could make a movie about this man. He was an explorer, adventurer, settler, bear hunter and much more. He was a Texas Ranger at one time, the first sheriff of Wood County, veteran of the Texas Revolution and the Confederacy, and served in the Texas House of Representatives. It's not known if he actually built the community of Stout, but he did live nearby with a grist mill and freight hauling company that he ran between Wood County and Jefferson. There are several stories of him fighting bear with only a knife. He even rode with David Crockett hunting buffalo and even helped plan Crockett's last route to the Alamo. This is one man that I wish I could have met.
With all of this info, me and The Kid loaded up in the car shortly after the blizzard started thawing out and we made our trip south on 312 out of Winnsboro. We came to the intersection of 312 and 4640 and aside from a few houses, there's not much that says "Hey, this was a settlement at one time."
We continued our journey another three miles or so down to 2088 and hung a left headed to Perryville. Just a mile further and on the right is a little park with the Stout Family cemetery on a hill overlooking it. With a chill in the air and the ground a little soggy from all of the snow and rain, we made our way up and into the fenced in site. There is a historical marker at the end near the road. It's a beautiful little overlook and if I were to want a place to settle my weary bones when it was all over, this would be a nice spot. Many descendants are buried here, but if you walk to the center of the cemetery, you'll come across Captain Stout's grave marker. It's new, and some of the others that haven't been replaced are so weather-worn that it's hard to read them. Some markers are nothing but flat stones set on end in the dirt.

It's amazing how much information is hiding in that little dash between the birth and death date. Thankfully books have been preserved and stories have made it to the internet for reading, because truly these are adventures that need to be remembered. And this is why The Kid and I like to ramble, to find these stories and see the evidence that is left behind.

Email ThisBlogThis!Share to TwitterShare to FacebookShare to Pinterest
Labels: WinnsboroLiving

Today was the fifth anniversary of the death of Joey Feek. Joey and her husband Rory Feek were country musicians and very talented. Joey was diagnosed with cervical cancer and though fought it off once, it relapsed and eventually she passed.

I found a lot in common with Rory. Our wives had only turned forty when struck with cancer and we were both left to take care of our small daughters. And to this day he feels that he is still a husband to his late wife as I do. I admire him for his faith and his strength and would love to meet him one day just to shake his hand and thank him for giving me someone to take lessons from.

If you get a chance, he's got a show called This Life I Live that you can watch on RFD-TV or on Youtube. It's also a book. He still makes music and the latest one is a beautiful ode to his wife even though it was written long before her passing.

Hug and Kiss your loved ones. 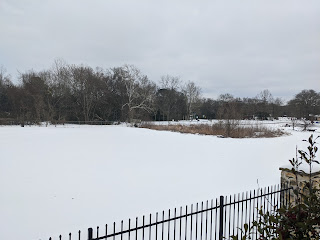 The view from my patio sums it up just fine. Lots of snow, considering it's Texas, and low temps makes me want to hibernate like a bear. I step out on to my patio like a king would man his parapets to survey his domain. "Yep, that's snow. And it's cold." Okay, domain is still there, I'm going back inside to get warm. I do all of this bundled up in sweatpants, tshirt, long sleeve shirt, housecoat and slippers. I've decided it's not worth the risk of a slip or fall to go out and partake in snow activities.
The Kid is already learning to judge patches of seemingly "safe" snow and has quit running higgledy-piggledy all over creation. She's figured that busting her behind several times is lesson enough and is demonstrating caution when playing.
If I had a big truck like most other Texans, I might decide to get out and hit a few backroads. Alas, my little Nissan Versa does not instill me with confidence, so I sit in the comfort of my apartment and cruise Facebook looking at other folks' photos.
At the time of this writing, we've got one more little patch of bad weather coming and I'm not so much worried for me, but others who have already suffered with rolling black outs or just downright lost power. Some of my friends back in Dallas are still waiting on power after twenty-four hours without. I've lowered my thermostat and put on a few layers of clothing, but haven't had any outages yet.
That could be coming though. The apartment complex I live in is weird about it's electricity distribution. I noticed during a power outage last year, shortly after moving here, that one half of the complex got power back a full fifteen minutes before our half. I jokingly assumed that folks on that half maybe paid more rent for that luxury. Same thing happened last week, with power going out for about an hour early in the morning, but the other side of the complex didn't even blink. I wouldn't have probably known about it except for two things. One, I'm that guy that sleeps with fans on. That sudden onslaught of silence wakes me every time. Two, I have a c-pap machine for sleep apnea. Basically, I wear a mask that helps me breath at night. When power goes off, that mask becomes a face hugger from Aliens and I come up out of a dead sleep clawing at my face! Anyway, the other side of the complex lost their power this morning for a few hours, but we are doing fine on this side. Here's hoping they forget about us.
As I sit here and read posts from other areas of Texas, I wonder how folks in our neck of the woods are handling things? Do towns like Winnsboro, Quitman and Mineola have buildings that can be used as warming stations for folks that have lost power or are maybe suffering other problems? Granted, these are unprecedented times, but it's something that should be considered. It really doesn't need a lot of planning, or at least I wouldn't think so as I'm not an emergency planner even on a personal scale. I tend to react as it happens. It doesn't always end well, but those are stories for another day.
Long story short is no, I'm not getting out in this stuff, I hope that for those that are having difficulties it gets better soon, and if you have neighbors that you can check on, do so. In the meantime, stay safe, stay warm and it'll be over soon. At least the weather folks say it will be and we can trust them, right?