I don't listen to radio much anymore. Pretty much the only stations that gets played in the car is one of the Kid's Pop stations with the same ten songs on repeat. There are maybe two songs out of the bunch that don't irritate my ulcer. And that's saying a lot.

When I do get to listen to something I like, it's usually met with sullen silence from the progeny and I will eventually relent. You know how it goes; It's better for her to be happy and you suffer in silence than the other way around.

When I had my Google Pixel (original) I would listen to my 91X app through an audio plug into my dashboard. 91X is a station that's been around since 1983 starting on the Baja Peninsula and eventually moving stateside to San Diego. I was first introduced to them while I was stationed in San Diego for electronics training with the Navy. They played alternative which back then included my favorites The Cure, Oingo Boingo, and The Cult, just to mention a few. Unfortunately, since I've upgraded to a Pixel 4, I can't wire it to the dashboard because the Pixel 4 does not have a headphone jack. That's really the only problem I have with the phone though. Time to upgrade to a Bluetooth jack I guess. 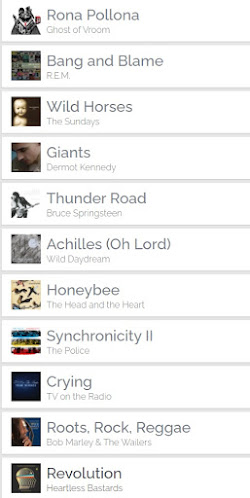 I also listen to 91.7 KTX out of Denton, Texas. It's format is AAA (Adult Album Alternative). I've always been a fan of this format because it's playlist varies just like my tastes. This playlist is just a forty-five minute sample of what was played this morning. They also have shows that highlight World Music, Jazz, Blues and much much more. I can pick it up on the car radio on a good day, but if I drive down a hill I lose signal just a little. Fortunately, there's an app for that!

So, question of the day is this: Are you a radio listener? Apps? Or do you value your silence (there's a future blog post about this)? If you do listen to radio or apps, what are they? Inquiring minds want to know!