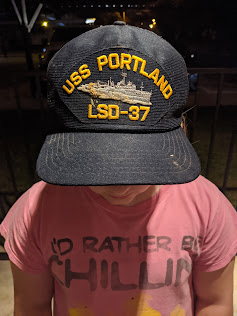 I'm a little overdue for getting this out, but it's been busy around here. I had a table at a comic book show the weekend after our little town parade and then boom! Thanksgiving was upon us, but here it goes.

I joined the Navy as a means to an end. I wanted to be a nuclear engineer but didn't have any idea how to accomplish it. Navy recruiters came to school showing a video about the Nuclear-Powered Navy and I was hooked.

I didn't end up getting my degree, but I finished out my six year service. I didn't have any desire to stay in at the time, but as the years went on, I would look back at my service with growing pride. I served in Desert Shield/Desert Storm. I didn't really understand everything that happened until I got back to the states and eventually got discharged in 1992. Even now, it's hard to find information on what we did, but thanks to Facebook groups, I've been able to find more and more info.

As I get older, I realize that though it wasn't my original intention, I did something that less than one half of one percent of Americans choose to do. I don't necessarily believe all conflicts are justified, but the folks that I met from Kuwait and surrounding countries during that time wanted us there. It makes me proud to have served and I support anyone who wants to join the military.

At first, I didn't feel comfortable having someone thank me for my service. I didn't know what to say to something that I didn't feel I deserved. To me, those service members who gave their lives or were in heavier combat than I ever saw were way more deserving than I. But I read an article from someone who put it in perspective. We can't all be on the frontline, but we support them by doing our jobs, like my ship, among a flotilla of ships, setting up warfare ops off the coast of Kuwait and drawing fire for main force attacking from the western desert.

When I heard of our little parade here in Winnsboro, I pulled out the old ball cap with my ship's emblem on it. With Covid, the veterans formed up out in front of the high school and listened to the high school band play the different military songs and afterwards drove off in procession to the other schools. Along the way, we got cheers and "we love you" from the kids and it felt awesome. There were several times when I thought I would tear up. My daughter and her friends were so excited to see us drive by and my heart was full seeing all of the kids.

I love this little town and it's American pride. I know America isn't perfect, but what truly makes America great is the fact that there are so many people working together to make it great. Do we still have racism, poverty, injustice and inequality? Yes, but it's our constant stride together to make it better that makes me proud of America and my service in the military.

Thank you to those that served and are still serving.